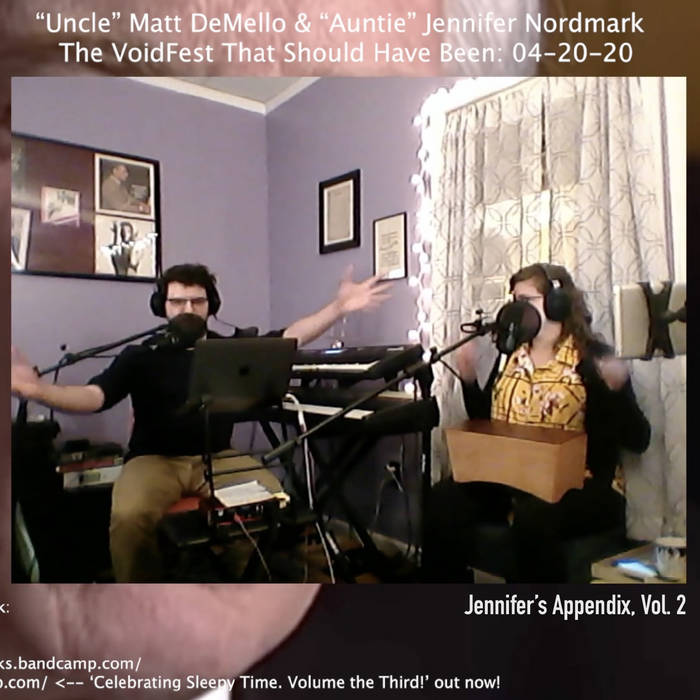 Necrocius Grand! An inclusive musical universe of variety. I wish the lyrics were uploaded so that I could follow more carefully the meaning behind the beautiful melodies. A duo that plays like a big band! Favorite track: An Inkling on a Rooftop / Between Myself and All My Friends ["Live"].

We rocked this live/streaming set for VoidFest 2020 so hard, we crashed their servers 30 minutes in! Luckily, our rig recorded our whole set. This video has only been touched up with an audio remix/remaster for maximum fidelity to the performance and edited for time (and with maximum discrimination for precious moments spent troubleshooting technical difficulties).

Many thanks to Jim Moon at Telekosmik Records and Screaming into the Void for having us, Ilya at I<3Noise for spreading the good word, and Ignasus for blasting this release via “Music for a Confinement” in time for Bandcamp’s waved fees day on May 1st, 2020.

All songs written by Matthew DeMello except Track 7, written by Bob Dylan. All tracks performed by "Uncle" Matt DeMello (lead vox, keyboards, backing tracks, guitar) and "Auntie" Jennifer Nordmark (lead vox, hand drum) on April 20, 2020 at Satellite Studios in Peekskill, NY to be broadcast live during the VoidFest streaming festival via the Screaming Into the Void YouTube streaming channel. Though not all of their broadcast made the livestream…

Tracks 2, 3, 4 originally featured on (and feature direct backing tracks from the recording sessions of) ‘There’s No Place Like Nowhere’, the debut LP by Matt DeMello released November 19, 2014 by Salieri Records and available at:
mattdemelloandthesignificantlooks.bandcamp.com/album/theres-no-place-like-nowhere

You can find a full video of this performance, originally meant to broadcast at VoidFest 2020 here:
youtu.be/42y_chRd-A8