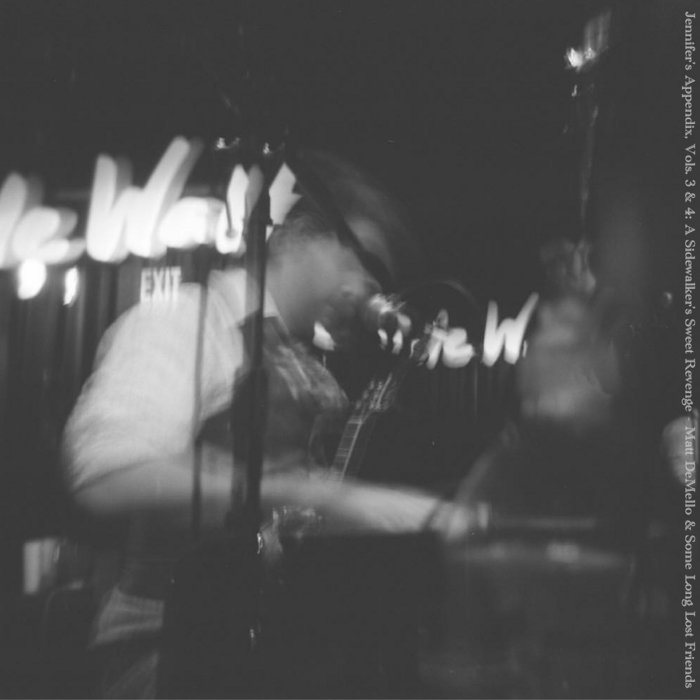 Sophisticated Schizophrenic Records & Publishing Live sets that kick ass so hard that you should apply hem cream before listening though I must profess a bias to the bonus studio track.

The Sidewalk Cafe in Alphabet City, NYC was a legendary music venue, which any cursory Wikipedia search will tell you is perhaps best remembered as the stomping grounds of Beck, the Moldy Peaches, and Regina Spektor. Not to mention a veritable pitcher's bench for the Strokes' A&R guy at RCA that was knee deep in radical talent for well over a decade.

As many referred to it, Sidewalk was the birth place of "anti-folk" - a genre I have worn infrequently, if in name only, since the mid-Obama years. But anyone with any right to talk about the Sidewalk in depth (Jonathan Berger, Rebecca Florence, Ben Krieger, or Pete Dizzoza all come to mind) will tell you I have no business claiming any serious lineage in that name or anything deeper than a "guy who showed up to a bunch of open mics from 2012-18, and more often was a drunk and very rude audience member." Which, I guess, is pretty anti-folk in brand alone.

That said, I became the artist who made my first two albums -- 2014's 'There's No Place Like Nowhere' and 'Jennifer's Appendix, Vol. 1' a year later -- on that stage, and especially at their very famous open mics. Sidewalk's open mic, in fact, was the longest running open mic recorded in the city's history up until the venue's closing in mid-2019. And those open mics were something else... Everything from speed freaks carrying bongs in trenchcoats to the basement bathroom for quick hits to American Idol wannabes who found the place in a Google search. And often, the latter were objectively stranger people with more radical art.

The Bowery Poetry Club closed in 2013 and most of the talent moved up the Island, plus things were never too far from on-Broadway and off-. After Occupy, it was impossible to find anywhere in the city -- not Shea Stadium, not Bushwick, not 285 Kent, NOT Greenpoint, nope, nope, nope -- that was as welcoming to all walks of life while still serving as a nuclear furnace of outrageous creativity than the corner of East 6th and Avenue A every Monday from 7pm until around 2 in the morning. And then, if you were really lucky, things might get interesting*.

This collection tracks my evolution in those years through the four best EP/vinyl side-length runs of songs performed at various headlining shows on the Sidewalk stage. The first disc is comprised of solo sets spread across 2013-16, and the second is derived from two infamous full-band shows. The first, with the short-lived (and quite jazz-oriented) 'Matt DeMello Band' from the Vol. 1 album release show, October 15th, 2015. The second is from a much more heavily intoxicated and ambitious lineup for my 30th Birthday show under the monicker 'The Roslin Administration' on January 28th, 2017. Also the day Trump took office, coincidentally.

I really wish I could credit the incredible sound engineers at these shows for their work but alas, their names are lost to time. This collection is dedicated to them and everyone who made the Sidewalk nothing less than an American musical landmark.

They deserve as much credit for dealing with my endless and negotiations over however much time I had left in my set, as you can tell...

* Ben Krieger might perform all of 1. Pink Floyd's 'The Wall' or 2. The 1986 Animated Transformers movie OST on acoustic guitar/piano.


...with The Anti-Matter Horns