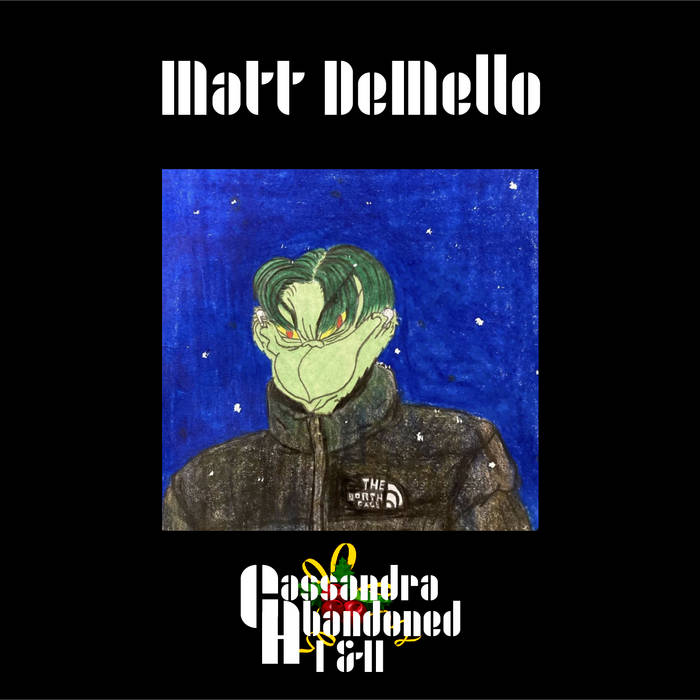 Sophisticated Schizophrenic Records & Publishing Aw, shucks. Thanks for the liner note love, you sweet motherfucker. Had to jump to 4'33" to compare arrangements. The sinus congestion makes for an interesting texture.

The rest of you, buy the fuckin' catalog. It's worth the price.

Cassandra Abandoned I & II:
Not a kind, but a kind-of solstice celebration.

To my brother Joel, who is always the most supportive of me at my least apologetic.

And in loving memory of Doris Beauregard, a real hip-slinger, who took no shit from anyone (lol let alone me) and believed in sitting in the front row of any performance so she could "see the sweat on their faces." I love and miss you more than ever. Also you'd be super pissed that I dedicated a 2xLP with a riff on the Soviet National Anthem on it to you... if you were alive. But I bet you're proud of my rotten self anyway. So there. 1922-2006

"Safe, Antony; Brutus is safe enough:
I dare assure thee that no enemy
Shall ever take alive the noble Brutus:
The gods defend him from so great a shame!
When you do find him, or alive or dead,
He will be found like Brutus, like himself."

All tracks recorded, mixed, and mastered by Matthew DeMello at The Satellite of Love 2.0 between September 1st, 2014 and December 31st (some bonus tracking of guitar on track 2 until January 3rd, 2022), 2021 except: Live instrumental tracks on Track 2 'Ultimate Bounty, No. 1: Headvoices'. recorded on October 18, 2018, and mixed by Alex Busi at NEWSPACEAUDIO in Queens, NY, December 15-23rd, 2021 with performances on bass by John Alexander Busi and drums by Andrew 'Roo' O'Donnell; Frooty Loops tracks on Track 2 'Ultimate Bounty, No. 1: Headvoices, A. On Public Transportation' performed, recorded, and mixed by Jesse Ferland est. September 2019; instrumental tracks on Track 2 'Ultimate Bounty, No. 1: Headvoices, C. Hic Sunt Dracones, II. 1 Thing (I Guess It All Depends...)' performed and recorded by Matthew DeMello at Quinnipiac University October 2008; Track 3 'Ultimate Bounty, No. 2: Camelot Snowplowing, LLC - First Movement, Gospel of a New St. Paul; Sections A-E' recorded by Matthew DeMello at Oak Hill Studios in Lincoln, RI on January 16, 2021, mixed by Matthew DeMello between March 7th- December 31st, 2021 at The Satellite of Love 2.0; Track 7 'Duopolis' instrumental tracks recorded by NOEX Beats; Track 14 'Anarchic Variations on an Excerpt from the 1944 Version of the State Anthem of the Soviet Union' instrumental tracks performed, recorded and mixed by Mickey Blurr est. October 2020. Cover art by god knows who, cover art design and layout by Matthew DeMello.

Special thanks: All my collaborators on this project - Busi, NOEX Beats, Roo, Jesse, Mickey Blurr, the love of my life Jennifer Nordmark, Zeus "The Director" Springstein, and the Former Soviet Union. John Cage, ALW, Time Rice, the Joseph Campbell estate/Foundation, and the Former Soviet Union especially for permission to use their songs/recordings/work. Liz Wagner Biro and Amanda O'Keefe for their backing vocals and probably just found out this album even exists (sorry). Incentive/James Osborne for all his help getting my sh*t together this year. Comic Sans Tiberian Orchestra - my many thanks for YOUR contributions. My family (Joel, Laura, Mom, Dad, Zoey, Isla, Tom, Margot, Shannon, Tim), my new family: (Hi Russ, Jane, Taylor, and Noah!), Brian Wilson (the cat), and Brian Wilson (the human). Donna and Glenn, for all the old James Bond in the Man Cave days - you can hear OHMSS theme in "Escapist's Finale". Tim Dillon: I think this album will definitely make me the "Billy Joel of indie rock," as you've always predicted! Better than the Ben Folds of vaporwave, I guess. On that note: Everyone on Bandcamp Twitter who has been so supportive the last few years: Jim/TAXXESS, NOEX, Incentive/James Osborne, Pete Murphy, Billy Anderson, Billy Hubbard, Big Lots, Ilya and our bigger family at I<3Noise, Filip and Angie with Z Tapes, Kristos, Mo, J.M. Smig, R. Stevie, SkyTWOHigh, Tom F. Oolery, Alpha Chrome Yayo, TJ Fitzpatrick. The remnants of the 2nd Providence golden age: Volcano Kings, the entire scene surrounding Sgt. Baker and the Clones, omg wtf. Cory Waldron and all his feedback on whatever he heard from the demos, whenever and whatever he heard of them. Everyone on the Advent Aspects, Dream Shore, and Virtual Oasis discords and especially So?ing Machine and Eternal Judge. Louder Than War and Global Texas Chronicle for their eyeballs and attention spans. Emily! My Co-Editorial Director for Life! It wasn't all a dream! Some of it was real? Rob Duguay just for being Rob (also writing up Volcano Kings in projo this month, thankkk youuuu!!!). Everyone who has ever been a part or will be a part of Salieri Records. Glen Keane for giving me a reason for recording part of this in LA, albeit in a cute little airbnb. (Yes, THAT Glen Keane.) Steve "Santa Claus" Vessella (and Kara - lol, Roo...) for showing me what the true "spirit of Christmas" is all about, if you will. Courtney, for not being an actual asshole like the rest of that rotten lot. Of course, the great hominids of the Syndicate Federation of Cornelian Democratic Spheres. Britney, Usher, DJ Abe, Gerry Butler, whoever's left at Zomba. Brett Bracy and Nikola Wild - LCD and Amy Winehouse Summer 2007 forever. The Starship: Alyssa, Tom, and yes even you, Antonio. What a time. Everyone at NWBRV and BVTC. Dani Probably (who is directly responsible for at least one bonus track if not a whole entire vibe)! And finally, the original pilgrims of sound: Ian Cat, Stephen Bailey -- I tried not "trying too hard" on this one, still plenty of notes though... Also thanks to that Uber driver in LA who checked out my music on insta and gave me the deal on local punk. Also everyone who put up with me reissuing this 3 times in a row the week it came out. I can tell you're committed! Ugh god. To Michael Feldstein and Ryan Nicholsen: your friendships mean the world to me. Oh and thanks to Jody Stephens for giving me a tour of the womb for the greatest Christmas song and album ever made. 10-15-14<3